Featuring the Original and Largest Concrete Track in the valley!

Message From Our Club Coordinator 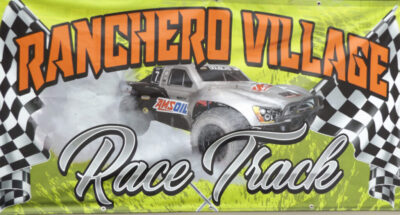 The club held a meeting on Wednesday, October 13, 2:00 pm in the large hall. Because every club member, along with many other residents, was not in-park yet I decided to have a meeting with who was here now. The reason I decided that, was because we were about to open our racing season, and following our coordinators board meeting, held on October 9th, we decided to go ahead and have a meeting to clarify new racing concept and several other items needed to be discussed before the season started.

The member meeting discussed and clarified the race configuration and styles that were agreed on last April through the email voting that was sent out. One idea that I brought up was the fact that according to the park general manager, Nathan, the R C club is now going to have to be considered a “self- funding” club. This means that we can no longer ask the park for money for our maintenance and needs. We cannot, at least at this point in time, join the VCC activities board because they cannot support the RC club. The coordinator board is not in favor of joining the VCC now anyway.

So, in light of the need for funds for continued maintenance, the board concluded, and voted, to bring to the membership a proposal to increase our annual club dues to $20 per member payable in December of each year. This increase will be broken down as follows: $10 will be kept as our club funds used for items required to make our racing work, as in- printer paper, computers for the tracks, printers for the tracks, clip boards used, stools to sit on,etc. Basically club operation. The other $10 will held separately as a “ maintenance fund”. This money will be used “only” for maintenance required for all three venues, such as, paint, materials required for keeping up the tracks. Any new construction WILL be voted on by membership. This maintenance fund can be used during the Oct-Mar seasons by the maintenance coordinator as required and by using receipts to the club treasurer (Tom Hudson). There is NO provision for ANY funds being moved from the club fund, to the maintenance fund. Membership will need to vote and affirm any funds spent from the club portion. This has always been our club rule concerning club funds spending. During the Summer period, or when Mark is not in the park, the maintenance fund can be used by the club coordinator , Jerry Hudson. Club treasurer, Tom Hudson, will be charged will full accountability for both accounts. He has agreed to do so.

Another item discussed at the member meeting was a recommendation by the board to add one additional member to the board. That person would be called the “new member coordinator”, and be tasked with helping any new members, or prospective members get information about the club, assist in selection of a car to buy, and help to race with the club. Jim Neuharth volunteered for that position, and I’m sure he will do a great job.

Well, that is pretty much everything discussed at the member meeting Oct 13th. Dean and I decided that, because we had only 1/3 (13) members at the meeting, it would be a good idea to send out a email to the whole membership to comment on. As of today’s date there were mostly good comments. Nothing that would undo anything was voted on at the meeting. I would like to thank the club advisory board for all of their helpful and constructive comments along with cooperation. This was our first advisory board function. I hope it works for everyone.

I hope to have another ALL MEMBER meeting probably early December, once we see how well everything is working, and hopefully many more members will be in the park.